Paris, February 7, 2019 – Total has made a significant gas condensate discovery on the Brulpadda prospects, located on Block 11B/12B in the Outeniqua Basin, 175 kilometers off the southern coast of South Africa.

The Brulpadda well encountered 57 meters of net gas condensate pay in Lower Cretaceous reservoirs. Following the success of the main objective, the well was deepened to a final depth of 3,633 meters and has also been successful in the Brulpadda-deep prospect.

“We are very pleased to announce the Brulpadda discovery which was drilled in a challenging Deepwater environment”, said Kevin McLachlan, Senior Vice President Exploration at Total. “With this discovery, Total has opened a new world-class gas and oil play and is well positioned to test several follow-on prospects on the same block.”

Total drilled this exploration well with the latest generation drilling ship and was able to leverage its experience in similar environments, such as the West of Shetland, UK.

Following the success of Brulpadda and confirmation of the play potential, Total and its partners plan to acquire 3D seismic this year, followed by up to four exploration wells on this license.
The Block 11B/12B covers an area of 19,000 square kilometers, with water depths ranging from 200 to 1,800 meters, and is operated by Total with a 45% working interest, alongside Qatar Petroleum (25%), CNR international (20%) and Main Street, a South African consortium (10%). 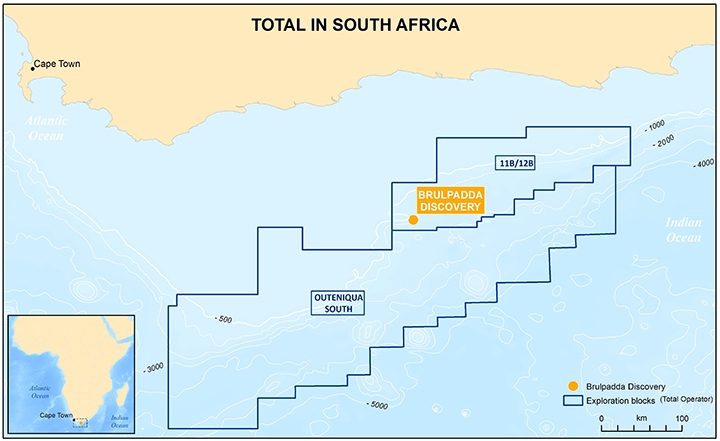 About Total in South Africa

Total has been present in South Africa since 1954. The Group is active on the whole oil and gas value chain and directly employs 1,000 people in the country.

Upstream, Total has developed oil and gas exploration activities in the Outeniqua basin with operating interests in two blocks, 11B /12B and South Outeniqua.

Downstream, Total, which is ranked in the top four petroleum products market companies in South Africa, operates about 550 service stations throughout the country and is present in all other business segments (lubricants, B2B, aviation, LPG, other specialties).

It also has interest in the Natref refinery in Sasolburg.

Through our SunPower affiliate, Total has also been developing solar projects and locally producing photovoltaic panels. Since 2016, its Prieska solar power plant (installed capacity of 75 megawatt-peak), located in the Northern Cape, has been supplying electricity to the equivalent of 70,000 households.

Total is a major energy player, which produces and markets fuels, natural gas and low-carbon electricity. Our 100,000 employees are committed to better energy that is safer, more affordable, cleaner and accessible to as many people as possible. Active in more than 130 countries, our ambition is to become the responsible energy major.

Cautionary note
This press release, from which no legal consequences may be drawn, is for information purposes only. The entities in which TOTAL S.A. directly or indirectly owns investments are separate legal entities. TOTAL S.A. has no liability for their acts or omissions. In this document, the terms “Total” and “Total Group” are sometimes used for convenience where general references are made to TOTAL S.A. and/or its subsidiaries. Likewise, the words “we”, “us” and “our” may also be used to refer to subsidiaries in general or to those who work for them.
This document may contain forward-looking information and statements that are based on a number of economic data and assumptions made in a given economic, competitive and regulatory environment. They may prove to be inaccurate in the future and are subject to a number of risk factors. Neither TOTAL S.A. nor any of its subsidiaries assumes any obligation to update publicly any forward-looking information or statement, objectives or trends contained in this document whether as a result of new information, future events or otherwise.