Nigeria: Total Starts Up Production of the Giant Egina Field

Paris – Total has started up production on December 29, 2018 from the Egina field, located in around 1,600 meters of water depths, 150 kilometers off the coast of Nigeria. At plateau, the Egina field will produce 200,000 barrels of oil per day, which represents about 10% of Nigeria’s production.

The Floating Production Storage and Offloading (FPSO) unit used to develop the giant Egina field is the largest one Total has ever built. This project has also involved a record level of local contractors. Six of the eighteen modules on the FPSO were built and integrated locally, and 77% of hours spent on the project were worked locally. Startup has been achieved close to 10% below the initial budget, which represents more than 1 billion dollars of CAPEX savings, due in particular to excellent drilling performance where the drilling time per well has been reduced by 30%.

“Total is proud to deliver a project of this size under the initial budget and to contribute to the development of Nigeria’s oil and gas sector by generating employment as well as building industrial capability. Egina will significantly boost the Group’s production and cash flow from 2019 onwards, and benefit from our strong cost reduction efforts in Nigeria where we have reduced our operating costs by 40% over the last four years,” stated Arnaud Breuillac, President Exploration & Production. “Furthermore, some upside potential nearby remains to be developed and we are studying in particular Preowei discovery tie-back to the Egina FPSO.”

Initially discovered in 2003, the Egina field is the second development in production on the Oil Mining Lease (OML) 130 following the Akpo field, which started-up in 2009. The Preowei field is another large discovery made on this prolific block for which an investment decision is scheduled for 2019. 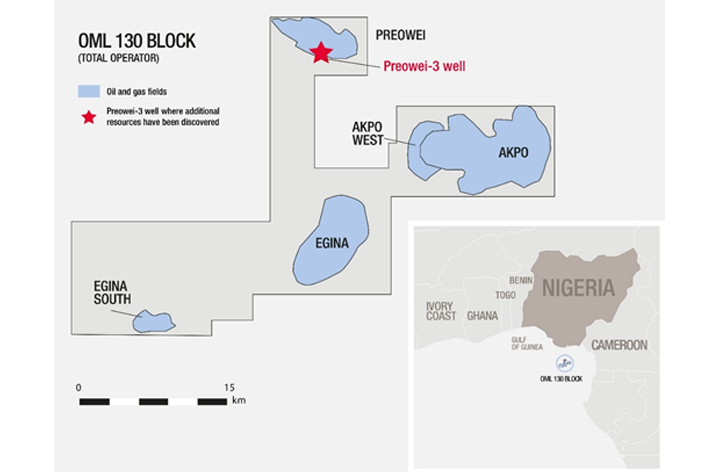 About Total in Nigeria
Total has been present in Nigeria for over 50 years, both in upstream and downstream activities.

Total operates five production licenses (OML) on the 34 leases in which the Group has interests (including two exploration licenses).

In addition to OML 130 where the Akpo, Egina and Preowei fields were discovered, Total operates other offshore assets such as OML 99 (40%) where the Ikike discovery is located, OML 100 (40%) and OML 102 (40%) where the Ofon 2 project was completed in 2016. Onshore, Total is the operator of OML 58 (40%) under its joint venture with Nigerian National Petroleum Corporation (NNPC). The Group is also developing Liquefied Natural Gas (LNG) activities with a 15% stake in the Nigeria LNG Ltd company, which operates six LNG liquefaction trains on Bonny Island.

In the downstream sector, Total operates in a leading position with an extensive distribution network of over 550 service stations nationwide and a wide range of top quality energy products and services.

The Group is committed to working closely with its host communities in Nigeria and is supporting many projects in the field of health, education, infrastructure and economic development, through its sustainable development and community relations programs. With a diverse workforce of several nationalities and cultures working together, Total is proud of its contributions to the socio-economic development of Nigeria.

About Total
Total is a major energy player, which produces and markets fuels, natural gas and low-carbon electricity. Our 100,000 employees are committed to better energy that is safer, more affordable, cleaner and accessible to as many people as possible. Active in more than 130 countries, our ambition is to become the responsible energy major.

Cautionary note
This press release, from which no legal consequences may be drawn, is for information purposes only. The entities in which TOTAL S.A. directly or indirectly owns investments are separate legal entities. TOTAL S.A. has no liability for their acts or omissions. In this document, the terms “Total” and “Total Group” are sometimes used for convenience where general references are made to TOTAL S.A. and/or its subsidiaries. Likewise, the words “we”, “us” and “our” may also be used to refer to subsidiaries in general or to those who work for them.
This document may contain forward-looking information and statements that are based on a number of economic data and assumptions made in a given economic, competitive and regulatory environment. They may prove to be inaccurate in the future and are subject to a number of risk factors. Neither TOTAL S.A. nor any of its subsidiaries assumes any obligation to update publicly any forward-looking information or statement, objectives or trends contained in this document whether as a result of new information, future event.